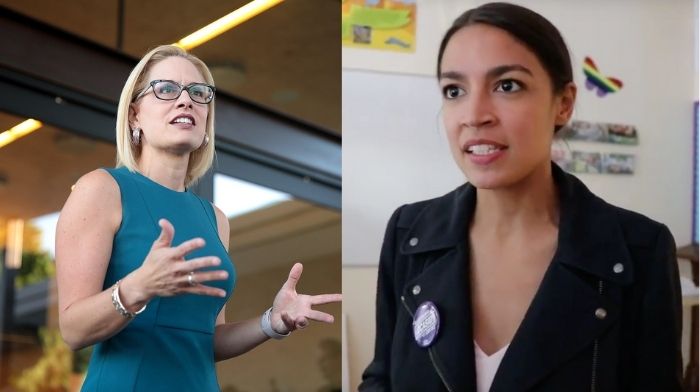 In a rare display of Democrat concern for massive spending, Sen. Kyrsten Sinema (D-AZ) said on Wednesday that while she will go along with her fellow Democrats on a multi-trillion dollar spending bill,  she will attempt to scale down the cost of the bill.

As one can imagine, the far-left didn’t take kindly to such a proposition.

Sinema stated, “While I will support beginning this process, I do not support a bill that costs $3.5 trillion — and in the coming months, I will work in good faith to develop this legislation.”

Sinema is more of a Republican than McCain was

Sinema Incurs The Wrath Of The ‘Squad’

With this announcement, the tweets flew hard and fast from far-left progressives, voicing their outrage for Sinema’s stance.

This from Rep. Alexandria Ocasio-Cortez (D-NY), with a dash of the race card:

Good luck tanking your own party’s investment on childcare, climate action, and infrastructure while presuming you’ll survive a 3 vote House margin – especially after choosing to exclude members of color from negotiations and calling that a “bipartisan accomplishment.” 👍🏽👍🏽 https://t.co/0VF8Z73vAa

Rep. Rashida Tlaib (D-MI) accused Sinema of not caring about people in Arizona, and only wanting to befriend Republicans.

Sinema seems not to care that her own state is flooding, the west is burning, and infrastructure around the country is crumbling. Sinema is more interested in gaining GOP friends and blocking much needed resources, than fighting for her residents’ future. https://t.co/TfSc0uoY1j pic.twitter.com/nTFC2lizfK

If Kyrsten Sinema was trying to make clear to her voters that she simply does not care about their child care, senior care and health care needs she has done a fantastic job. Her name is synonymous with abandoning the working class.

Advancing the budget bill sends committees off to begin writing reconciliation legislation in order to get around any GOP filibusters.

And while it is good news for Democrats and Sinema because she is onboard with getting a budget bill passed before the August recess, there will be work to be done on the price tag of the final product.

Many House Democrats have said that they will not support any bipartisan package unless they are assured of the reconciliation bill being passed as well. The $3.5 trillion total represents President Joe Biden’s jobs and families plan.

Many of those same House Democrats are prioritizing the budget plan, which includes a historic expansion of Medicare, in which there are provisions for covering hearing, dental, and vision, as well as things like childcare and climate “action.”

Sinema Not Always A Sure Thing For Democrats

Kyrsten Sinema is not always a sure vote along party lines for the Democrats. Like West Virginia Senator Joe Manchin, she is seen as a moderate. Both Sinema and Manchin have endured intense pressure from the party to vote to end the filibuster.

Sinema has defended her position saying, “My support for retaining the 60-vote threshold is not based on the importance of any particular policy. It is based on what is best for our democracy.”

This is also not the first time she has riled those on the far left of her party.

Back in March, when the Senate was voting on a minimum wage amendment to the coronavirus stimulus bill, Sinema took to the Senate floor and gave an emphatic “thumbs down” vote.

Moderates are a big problem for the Democrats. Manchin has not made any statements on the $3.5 trillion proposal. Sen. John Tester (D-MT), also considered a moderate, has said that he will support the budget bill, but is not a definite on the end results.

Democrats need everyone on board, including “rogue” moderates to pass anything.