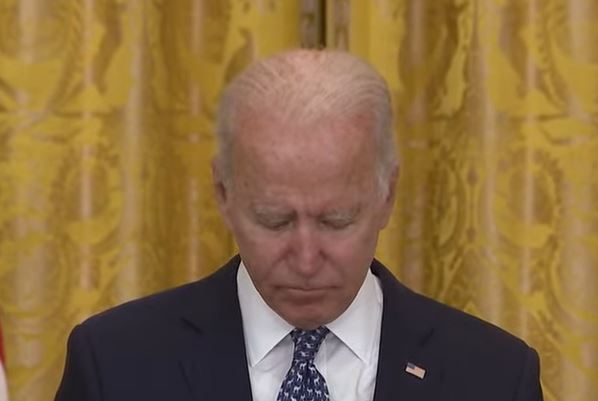 By J. Peder Zane for RealClearPolitics

The Democratic Party and its apparatchiks in the media keep asking the American people variations on a single question: What are you going to believe, me or your lying eyes?

From the Trump/Russia collusion fantasy and concocted claims that Hunter Biden’s laptop was “Russian disinformation,” to ongoing efforts to cast an America that has never been freer or fairer as a nation riddled with “systemic” racial oppression, they keep insisting that we reject clear and convincing evidence and embrace politically driven falsehoods.

The latest example is President Biden’s refusal to even acknowledge the catastrophic failure of his withdrawal from Afghanistan. The nation heard him say on July 8 that it was highly unlikely that the Taliban would overrun the country.

The Washington Post reports that his senior leadership team was caught so unaware by the Taliban’s August advance that many were on vacation when Kabul fell. Then came the images of chaotic panic at the airport, a grim scene turned violently grisly when a suicide bomber murdered scores of people, including 13 Americans.

Biden subsequently described the withdrawal as an “extraordinary success” even as he left behind lethal state-of-the-art military equipment worth billions of dollars as well as many Americans and Afghans who had aided us during the 20-year struggle – including the interpreter who helped rescue Biden himself in 2008.

Slowly but surely the mainstream press, which initially covered the debacle forthrightly, is beginning to embrace Biden’s narrative. Ezra Klein offered his New York Times readers a fatuous counterfactual defense: “A better withdrawal was possible — and our stingy, chaotic visa process was unforgivable — but so was a worse one.”

Jonathan Karl of ABC News played the Trump card: “The truth is that Biden accomplished exactly what Trump had tried to do in his final year in office. The only real difference is that Trump wanted to withdraw more quickly and with less regard for the Afghan citizens who worked with the United States.”

Expect to hear more of the same in the coming weeks. Don’t be surprised if Biden is nominated for a Nobel Peace Prize. The brazenness is stunning.

This is not your typical political spin, it is propaganda. It is the willful effort to corrupt our perception of reality. Say it loud and long enough and people will believe it. If they don’t, get Twitter mobs and cancel culture to silence and punish them. That is increasingly becoming the Democrats’ playbook.

Why do they do it? The obvious and most important answer is that they can, and it is incredibly useful. The spread of the Trump/Russia conspiracy theory helped them hobble a presidency just as the suppression of the Hunter Biden laptop story helped them win an election.

They are able to get away with it because they have convinced their allies in the press and millions of voters that our nation is locked in an existential battle with an evil enemy: the Republican Party.

False narratives that kneecap the enemy are serving a higher truth; admissions of error are taboo because they will only strengthen the opposition. Give no quarter is their mantra.

There is also a politico-psychological dynamic behind this posture. Democrats are the party of well-educated elites, whose position in society and sense of self are anchored in their belief in their intellectual merit.

Likewise, the Democratic Party’s argument for an all-powerful government is based on claims of competence and expertise. Acknowledging errors undermines their claims to authority.

This helps explain the lack of accountability. Firing, say, Secretary of State Anthony Blinken or Joint Chiefs of Staff Chairman Gen. Mark A. Milley for the Afghanistan debacle would suggest that our brilliant leaders are not so brilliant.

RELATED: Biden Gets Heckled By Protesters Upset Over His Afghanistan Debacle

To admit the obvious, yes, Republicans practice deception all the time. And it is also corrosive. But they do not control the government or, more importantly, the news. Their lies are almost always exposed, while those of the Democrats are often propagated.

This is at the root of our country’s deep divide. Even thoughtful conservatives are rightly skeptical of most everything they are told. This increasingly knee-jerk antagonism not only leads some to seek the truth, but also others to reject honest information, such as the efficacy of vaccines.

Indoctrination Begins Before Classes Even Start