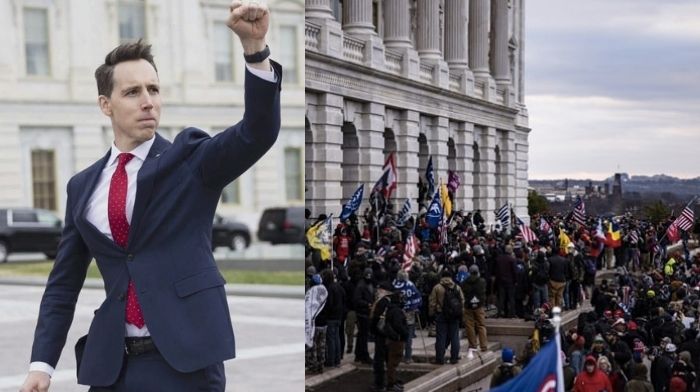 Publisher Simon & Schuster announced on Thursday that it would not be publishing a forthcoming book by Missouri Senator Josh Hawley after he challenged electors on Wednesday.

The book entitled, “The Tyranny of Big Tech,” that is described by the Washington Post as something that, “represents the gravest threat to American liberty since the monopolies of the gilded age.”

Hawley, the junior Senator from Missouri, was among the first Senators to announce that he would challenge the results of the 2020 presidential election when the Senate met to officially count electoral votes and declare former Vice President Joe Biden President-elect.

Millions of voters concerned about election integrity deserve to be heard. I will object on January 6 on their behalf pic.twitter.com/kTaaPPJGHE

Hawley is being widely blamed by both state and federal elected officials for inciting what became a riot at the Capitol building.

The violence came after a morning of peaceful protest by supporters of President Trump, who gathered in the nation’s capitol to protest what they believe to be a stolen presidential election.

The overflow crowd on the National Mall continues to grow as rallygoers await the President Trump’s speech at The Ellipse this morning #DC #SaveAmericaMarch #WashingtonDC #January6th pic.twitter.com/kFM4ESwtGa

In a statement, Simon & Schuster said they would be pulling the book, “After witnessing the disturbing, deadly insurrection that took place on Wednesday in Washington D.C.”

They went on to say that, “As a publisher, it will always be our mission to amplify a variety of voices and viewpoints…” But they “cannot support Senator Hawley after his role in what became a dangerous threat to our democracy and freedom.”

On Wednesday, in a photo that could be seen by most major media outlets, Hawley was shown entering the Capitol building giving a fist-pump to the crowd of Trump supporters.

The decision by Simon & Schuster came as many other Missourians who had been instrumental in Hawley’s rise to the Senate also spoke out against him.

According to the Washington Post, Missouri businessman and former Hawley donor David Humphries stated that, “Hawley should be censured for his use of irresponsible, inflammatory, and dangerous tactics.”

I have never regretted a vote as much and as quickly as my vote for @HawleyMO in 2018. His refusal to accept the legitimacy of Joe Biden’s election, even after today’s violence, is an embarrassment. Thanks @RoyBluntMO & @RepAnnWagner for doing the right thing.

One of the harshest statements came from former long-time Senator John Danforth, one of the key players in Hawley running for U.S. Senate, and whose former seat Hawley now occupies.

Danforth said that backing Hawley was, “the worst mistake I ever made in my life.”

In response to Simon & Schuster, Hawley blasted the publisher as being part of the “cancel culture,” and that he “would see them in court.”

He called the move by the publisher “Orwellian” and “a direct assault on the First Amendment.”

My statement on the woke mob at @simonschuster pic.twitter.com/pDxtZvz5J0

Hawley appears to have no intention of backing down.

According to the Washington Times, in a statement given to Columbia Missouri ABC affiliate KMIZ-17, Hawley said, “I will never apologize for giving voice to the millions of Missourians and Americans who have concerns about the integrity of our elections. That’s my job, and I will keep doing it.”

Watch: Chilling Final Video From Vet Ashli Babbit Just Before She Was Shot and Killed in DC