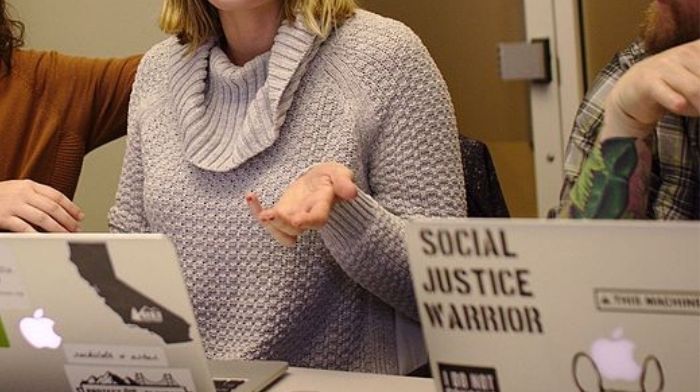 In a recent Atlantic article, Anne Applebaum compares our college campuses to New England Puritanism. She did so by drawing on the storyline of the novel “The Scarlet Letter,” wherein Hester Prynne suffers eternal ignominy for having sex and getting pregnant outside of wedlock.

So, too, Applebaum wrote, do many today receive a scarlet “C,” marked for shunning at the behest of a “Cancel Culture.”

While Applebaum’s comparison is helpful, a more fitting reference exists, one both historical and literary. The French Revolution, which began in 1789, provided the backdrop for Charles Dickens’snovel “A Tale of Two Cities.” It tells a tale with parallels to the college experience of today.

Dickens described a city — Paris — engulfed by the Revolutionary fervor of the Jacobins. Persons call each other “Citizen” and yell in enraptured tones about the Republic and its “Liberty, Equality, Fraternity.” Dickens always added “or Death” to this trio.

And he did so with good reason. The slightest hint or suspicion of lukewarm-ness, much less opposition, toward the principles of the new Republic resulted in accusation, imprisonment, and often execution. Dickens chillingly described the perpetual fear and anguish this situation caused to the human souls crushed underneath it.

So, too, are our campuses aflame with ideological zealotry. Like 18th-century France, universities adhere to and enforce a rigid set of beliefs. Equity, social justice, and wokeness summarize these 21st-century revolutionary doctrines.

I say doctrines because their adherents treat them as dogmas, with a fervor that mimics the ecstatic excesses of many religious experiences.

The term “woke” itself conjures Christian theological conceptions of revivalism, of passing from damnation to salvation by realizing sins and seeking their expiation.

On this front, Matthew Yglesias cleverly wrote of The Great Awokening. Like the French counterpart, however, this ideology, for the most part, rejects and replaces organized religion rather than comprising another manifestation of it.

This point only adds to its virulence, as it must create Heaven on earth since no eternal bliss exists. It must christen and employ angels of vengeance since no Final Judgment awaits otherwise to set things right.

True, the punishments enacted by the typical campus mobs fall short of imprisonment and physical death. Yet they guillotine careers and destroy friendships. They create a fear that harms the soul and turns classrooms into struggle sessions void of intellectual life and rife with sanctimonious posturing.

Moreover, we find a fitting literary composite of many social-justice warriors in the person of Madame Therese Defarge. She knits to encode the names of those who must be accused and die for the sake of the Republic.

RELATED: Will Democratic Leaders Side With Progressives Or Moderates?

Her bloodthirstiness knows no bounds. “Tell the Wind and the Fire where to stop,” she savagely declares, but “not me!” So, too, we find many on campuses whose knitting needles are social media accounts, marking out those sacrifices needed for greater purity.

So, too, do we find those who will never see adequate adherence to their dogmas, eating their enemies before devouring their own. Thomas Jefferson once wrote in 1793 — while foolishly defending the French Revolution — that “My own affections have been deeply wounded by some of the martyrs to this cause, but rather than it should have failed, I would have seen half the earth desolated.

Were there but an Adam and an Eve left in every country, and left free, it would be better than as it now is.” If some of the campus zealots get their way, one wonders if a university would have even that many left.

The tragedy of our campus revolution should not be underestimated. While largely not bloody, what it has sacrificed goes well beyond careers. It threatens to destroy the intellectual life that is the reason for colleges in the first place.

It undermines the cultivation of the soul and of citizens that our own republic, with its much better revolution, requires.

September 5 marked the anniversary of the “Reign of Terror,” an especially gruesome phase of the French Revolution that lasted from that date in 1793 until late July of 1794. Our own shows little signs of abatement, its voracious appetite for targets seemingly insatiable.

For those still brave enough to pursue truth in the academy, to quote Dickens, “it [is] the worst of times.”

[VIDEO] Biden Gets Booster Shot on Live TV, and He Manages to Screw That Up

There Cannot be Equity on Campus with Self-Censorship