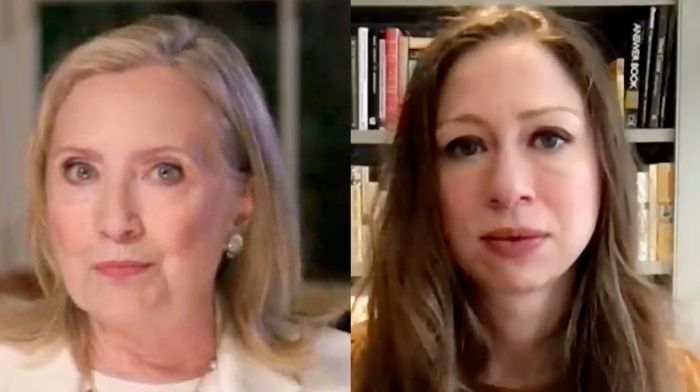 Chelsea Clinton went on “The Drew Barrymore Show” on Thursday to talk about how she and her mother, two-time failed presidential candidate Hillary Clinton, reacted to the pro-Donald Trump riots on Capitol Hill yesterday.

Chelsea claimed that it was she who broke the news of the riots to Hillary.

“I spoke to my mom yesterday at about 3 p.m. She had just come back from a walk … and she hadn’t seen what had happened,” Chelsea alleged. “I said, ‘Mom, you have to turn on the television,’ and there was just silence. So much sadness, and also so much anger, that this was happening.”

“When we spoke again later last night, there was a real sense of, ‘We have to hold people accountable,’ because we do. The insurrectionists, the terrorists, the mob who overwhelmed our Capitol. We have to hold those individuals accountable,” she added.

“And we have to hold our president accountable — who incited them, egged them on,” Chelsea said. “While it’s good that Twitter, Facebook and Instagram have locked [Trump’s] account, it’s insufficient to put it mildly. We have to stop not only the amplification but the injection of hate and instability and violence that he has personified over the last years.”

Chelsea went on to say that she felt “really sad” about the events that transpired on Wednesday.

“I’m sad is the overwhelming emotion I feel. I’m just so achingly sad that we had insurrectionists storm our Capitol,” she said. “It hadn’t happened since 1814, since the war of 1812, when the British invaded our country and that we had white nationalist terrorists effectively overwhelm our Capitol, terrorize our elected men and women of Congress, our Capitol police.”

“It’s just horrifying to me,” Chelsea added. “And then trying to explain what was happening to our children. I’m very sad today. I’m incredibly grateful and proud that Joe Biden and Kamala Harris will indeed be our next president and vice president of the United States. I’m holding that pride deep in my heart and my soul.”

There is obviously no love lost between the Clintons and Trump and his supporters, given the fact that it was him and the millions of Americans who voted for him that destroyed Hillary’s dreams of becoming president back in 2016.

This piece was written by James Samson on January 8, 2021. It originally appeared in LifeZette and is used by permission.