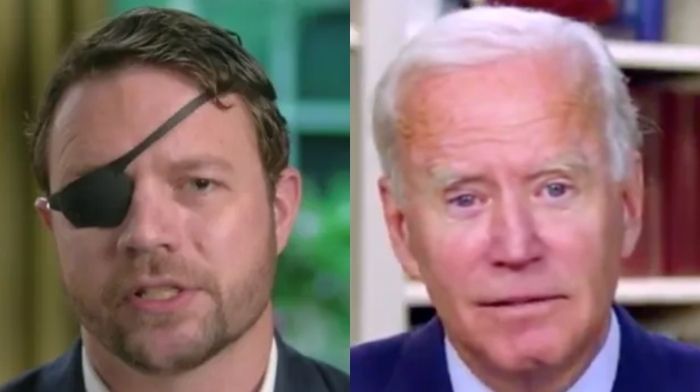 Crenshaw held nothing back as he slammed Joe Biden for his handling of the withdrawal, saying the United States is “paying in blood” for it.

Related: Dan Crenshaw Slams Biden For Being ‘Utterly Incompetent’ On Afghanistan – ‘Owes The American People A Lot Of Explanations’

“Every president since Bush has had to deal with this really difficult decision — Obama, Trump, but Biden’s the only one who really followed through with the stupidest possible option,” he continued. “And now we’re paying in blood for it. There are still ways to reverse course on this. There are still ways to uphold our dignity; to save our people on the ground.”

Related: Biden Says He Doesn’t Know How Afghanistan Withdrawal Could Have Been Handled Better

This comes days after Crenshaw sent a brutal message to the Taliban after the terrorist group demanded that the U.S. leave Afghanistan by the end of this month.

“The only proper response from America to these dirty savage terrorists should be: Go f*** yourself,” tweeted Crenshaw.

The only proper response from America to these dirty savage terrorists should be:

This piece was written by James Samson on August 26, 2021. It originally appeared in LifeZette and is used by permission.

Don Lemon Slams Anti-Mask Mandate Parents – ‘Just Because You Can Have Kids, Doesn’t Mean You Should’