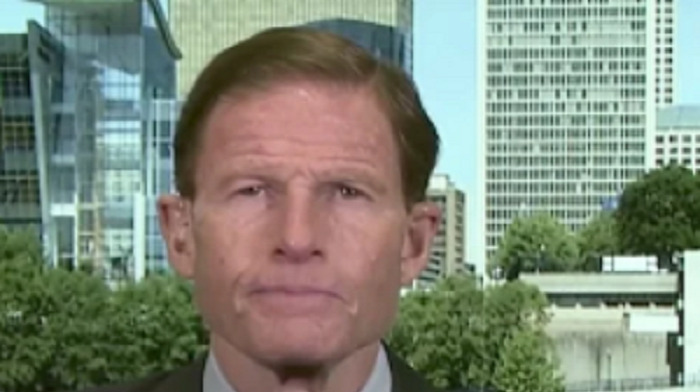 Democrat Senator Richard Blumenthal is “furious” with the Biden administration for reportedly delaying Americans and Afghan allies desperately trying to get out of Afghanistan.

Blumenthal (D-CT) specifically used the word “stranded” when discussing the fate that has befallen hundreds in the Taliban-controlled nation, a term the administration has taken issue with previously.

“I have been deeply frustrated, even furious, at our government’s delay and inaction,” he said in a statement Monday.

“There will be plenty of time to seek accountability for the inexcusable bureaucratic red tape that stranded so many of our Afghan allies,” continued Blumenthal.

“For now, my singular focus remains getting these planes in the air and safely to our airbase in Doha, where they have already been cleared to land.”

Blumenthal on trouble securing evacuee flight: “I have been deeply frustrated, even furious, at our government’s delay and inaction. I expect the White House and State Department to do everything in their power, absolutely everything, to make this happen.”https://t.co/42LbVNyoKP

Blumenthal was responding to reports that planes with Americans on board were not being allowed to leave Mazar-i-Sharif International Airport outside Kabul by the Taliban.

Representative Michael McCaul (R-TX), the top Republican on the House Foreign Affairs Committee, likened it to a hostage situation over the weekend.

“In fact we have six airplanes at Mazar-i-Sharif airport, six airplanes, with American citizens on them as I speak, also with these interpreters, and the Taliban is holding them hostage for demands right now,” McCaul said in an interview with Fox News.

As the Taliban solidified its control in Afghanistan, Rep. Michael McCaul accused the group of holding Americans hostage.

Asked about the delay in getting six passenger planes off the ground, the Taliban would only tell CBS News that, “they’re looking into it.” pic.twitter.com/CqYaZaCxnK

McCaul has said the planes have been grounded “for the last couple of days.”

“We know the reason why is because the Taliban want something in exchange,” he added. “This is really … turning into a hostage situation where they’re not gonna allow American citizens to leave until they get full recognition from the United States of America.”

I have been deeply frustrated, even furious, at our government’s delay & inaction. There will be plenty of time to seek accountability for the inexcusable bureaucratic red tape that stranded so many of our Afghan allies. 4/6

RELATED: California School Officials: There May ‘Easily’ Be Over A Thousand Left Behind In Afghanistan

Pentagon spokesman John Kirby last week was rather dismissive when discussing the possibility of Americans having been stranded in Afghanistan.

“We have Americans that get stranded in countries all the time,” he shrugged in an interview with MSNBC.

Biden’s Pentagon Spokesman John Kirby: “We have Americans that get #stranded in countries all the time.” pic.twitter.com/VXH5vxAwlI

Reports have surfaced indicating that there could “easily” be over a thousand California school children and their families still stuck in Afghanistan after being left behind by their government.

“There are easily a thousand more students — American born or children of SIVs — still trapped in Afghanistan,” Cajon Valley spokesperson Howard Shen said during a Thursday…”

There is no metric on the planet that can count this “evacuation” a success. Get our people home.

The furious Blumenthal went on to demand the Biden administration “do everything in their power” to bring home Americans who have been left behind.

“These are American citizens and Afghans who risked everything for our country,” he said. “We cannot leave them behind.”

Biden’s DOJ Plans To Intervene To Help Women Get Abortions?

Monica Lewinsky: Bill Clinton Should ‘Want To Apologize’ For His Role In Affair