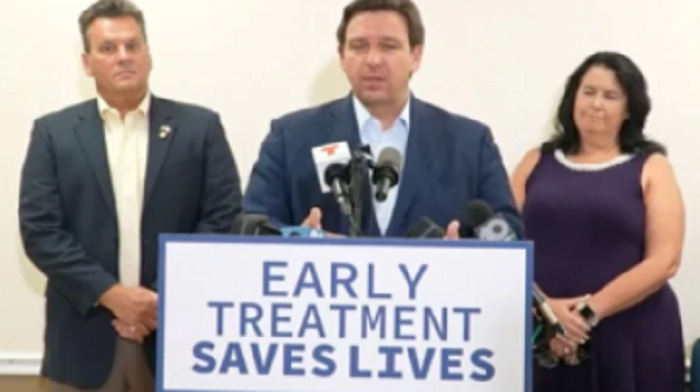 Florida Governor Ron DeSantis slammed the Associated Press in a letter for pushing what he describes as a “false narrative” that “will cost lives” while defending his press secretary’s criticism of the outlet.

DeSantis’ critique of the Associated Press (AP) comes amidst a verbal back and forth between CEO Daisy Veerasingham and the governor’s press secretary, Christina Pushaw.

Veerasingham had accused Pushaw of engaging in “harassing behavior” toward one of their reporters and enlisting an “online mob” to engage them.

The piece insinuated the governor was promoting a COVID-19 drug from Regeneron due to the fact that the CEO of a hedge fund owning shares in the company was a major donor to a political committee that supports the governor.

Pushaw responded by calling the article a “hit piece” on Twitter, referred to it as “cheap political innuendo,” and ripped it as an “irresponsible mockery of journalism.”

I sent him the thread debunking the Regeneron conspiracy theory pic.twitter.com/NReM1op9VF

Veerasingham’s letter to Governor DeSantis was silly, at best.

It accused Pushaw of threatening violence by using the common slang term “drag them” when asking followers to call out the narrative being driven by the Associated Press.

It whined about the “torrent of abusive comments” that the reporter received in response, something anybody who has ever been on Twitter experiences at one point or another.

And she called on the Governor to “eliminate this attack strategy” by Pushaw.

DeSantis’ response was probably not what they had in mind.

The @AssociatedPress is writing @GovRonDeSantis today re: his press secretary, @ChristinaPushaw, and her “direct effort to activate an online mob to attack” a @FLPressCorps reporter. “We call on you to eliminate this attack strategy from your press office,” the AP’s exec VP asks. pic.twitter.com/ghyK7Lwy2K

RELATED: DeSantis Says No To COVID Lockdowns: We Should Not Be Forced To Live In A ‘Faucian Dystopia’

Not the Response They Had Hoped For

DeSantis defended Pushaw and lashed out at the AP in what Fox News describes as “a remarkable open letter from a politician to a news organization.”

“I assumed your letter was to notify me that you were issuing a retraction of the partisan smear piece you published last week,” he wrote.

“Instead, you had the temerity to complain about the deserved blowback that your botched and discredited attempt to concoct a political narrative has received,” the letter continues.

“The ploy will not work to divert attention from the fact that the Associated Press published a false narrative that will lead some to decline effective treatment for COVID infections.”

His press Secretary debunked the hoax.

The AP tried getting her fired.

Here is how DeSantis responded: pic.twitter.com/hKJX7Kd1ys

As for the Associated Press article? Even Politifact points out that the hedge fund CEO’s “firm isn’t a major investor in Regeneron” as they had hinted at in their headline.

DeSantis described the AP’s approach as “clicks-first, facts-later” by running a headline that didn’t match the reality of what they were reporting.

By doing so, he believes the outlet may prevent people from seeking the treatment in question based on politics.

“You succeeded in publishing a misleading, clickbait headline about one of your political opponents, but at the expense of deterring individuals infected with COVID from seeking life-saving treatment, which will cost lives.” he accused.

Pompeo: ‘American Leadership Has Walked Off The Stage’ Under Biden