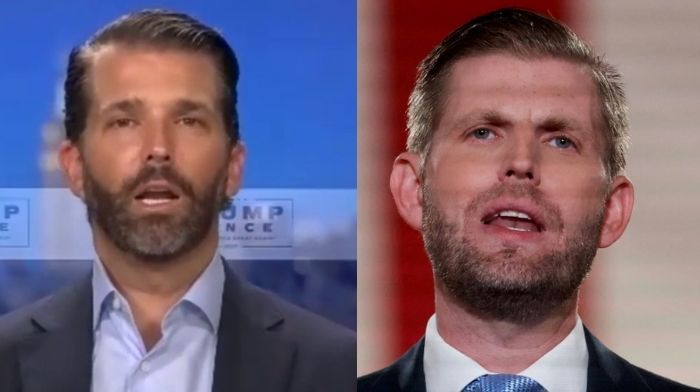 The sons of President Donald Trump declared war on the Republican Party during a rally that was meant to protest the results of the 2020 presidential election.

While speaking at the Washington D.C. rally, which drew thousands of people, Trump Jr. said that the gathering should be a wakeup call for the entire GOP. He then accused the Republican Party of not doing enough to help his father overturn the 2020 election results.

Trump Jr. went so far as to say that Republicans “did nothing to stop the steal.”

Trump Jr. went on to say that Republicans in Georgia “didn’t like the way the game was played,” so they chose not to take part in Trump’s attempts to steal the election. He then addressed congressional Republicans, saying that they had “an opportunity” to be heroes when they come together to count the state’s electoral votes in the House chambers.

“We are watching,” Trump Jr. said, adding that Republicans needed to fight in the face of “irregularities” and “statistical impossibilities.”

Not stopping there, he threatened to throw support behind primary challenges against Republicans who he and his family’s followers have found to be disloyal.

“They need to fight for Trump, because if not, I’m gonna be in your backyard in a couple of months,” he said. “If you’re gonna be the zero and not the hero, we’re coming for you.”

When it was Eric’s turn to speak, he had similar sentiments to those of his brother.

“I will personally work to defeat every single Republican Senator / Congressman who doesn’t stand up against this fraud – they will be primaried in their next election and they will lose,” he wrote.

I will personally work to defeat every single Republican Senator / Congressman who doesn’t stand up against this fraud – they will be primaried in their next election and they will lose.

This piece was written by James Samson on January 6, 2021. It originally appeared in LifeZette and is used by permission.

Read more at LifeZette:
Joy Behar Comes Unglued As She Calls For Trump To Be Impeached For ‘Treason’
Meghan McCain Takes A Stand For Trump Voters As She Returns To ‘The View’
CNN Host Jake Tapper Claims Republicans Are Attempting ‘Bloodless Coup’ By Objecting To Biden Win