FBI Finds Capitol Riot Was Not A Coordinated Plot 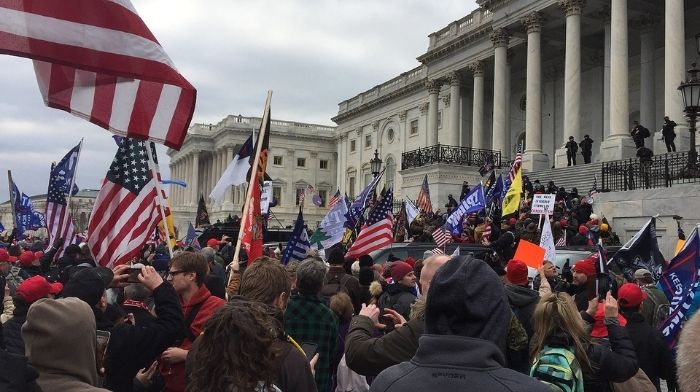 Reuters is reporting that officials familiar with the FBI’s investigation of the Capitol riot find there is little to no evidence that the event was a coordinated plot to overturn the election.

Since the Capitol riot, many in the media and on the left have variously described the riot as a “insurrection” or “plot” stemming from Donald Trump.

Not so, according to these officials.

What the FBI did find was small cells or groups of protesters associated with groups like the Oath-Keepers and the Proud Boys, who had a loose plan to break into the Capitol, but no plan for what to do when and if they got inside.

Prosecutors have filed charges against nearly 600 people, but hardly any of them even belonged to any groups, let alone were involved in a plot.

One of the more serious allegations: one Proud Boy leader urged other members of the group to begin stockpiling military type equipment, including bullet-proof vests prior to Jan. 6. Once in Washington D.C., the plan was for members to split into groups and attempt to enter the Capitol from various entrances.

So far, there have not been any charges that appear to be politically motivated. As far as has been reported, no one has been charged with insurrection or sedition.

Findings could blow a hole in Pelosi’s inquisition
New on https://t.co/bzJ8N6GJtO pic.twitter.com/dXQcdkzbJQ

The latest FBI findings could prove to be problematic for a House committee charged with investigating the riot that took place on Jan. 6.

Late last month, House Speaker Nancy Pelosi held a House Select committee hearing on the events of Jan. 6. Minus the presence of Trump supporters Reps. Jim Jordan (R-OH) and Jim Banks (R-IN), the committee did hear from Capitol Hill police officers who were there that day.

What the committee heard was Capitol Hill Police officer Harry Dunn speculate that those who were at the Capitol that day had some sort of “marching orders.”

Dunn’s credibility came into question after some of his social media posts, including one supporting one of the far left Democrat members of “the Squad.”

Another officer, Aquilino Gonell claimed that several of the protesters storming the Capitol that day said to him that, “Trump sent us.”

All of the officers who testified at the hearing wanted those on the committee to consider that Republicans may have encouraged the events of the day. Reuters reports that senior members of Congress have been briefed on the FBI report and find them to be credible.

That sound you hear is the narrative crashing…https://t.co/0OcCNdiLH5

RELATED: Trump Blasts Twitter For Allowing Taliban But Banning Him

Charges That have Not Been Filed

While there have been over 170 people charged with assaulting or impeding a police officer, there have been no charges of “seditious conspiracy,” which is essentially attempting to overthrow the government.

The House Select committee on Jan. 6 says they will be speaking to the FBI about their findings.

Reuters Exclusive: Jan 6 Riot was largely uncoordinated and not directed by Trump

This article has libs with the big sad

They have to consider the fact that 1000’s of people at the Capitol was a grassroots movementhttps://t.co/4JjK3J3Ce6

[VIDEO] Joe Scarborough Finally Has His “Come to Jesus” Moment About Dems, Live On The Air