For months, businesses around the country have taken a stand when it comes to the COVID-19 vaccine. Some businesses make the vaccine mandatory while others don’t. What seems to be an ongoing battle, one owner of a Florida diner is now turning away guests but it has nothing to do with COVID-19. Posting a sign outside the DeBary Diner, the owner is asking President Biden supporters to eat elsewhere. While Biden has been President for several months now, the decision by the owner comes after the suicide bomb that killed 13 U.S. service members.

TIRED OF THE ADS? BECOME A PREMIUM USER TODAY!!

Angie Ugarte, owner of the Debary for five years, was happy to read the blunt message to reporters. “If you voted for and continue to support and stand behind the worthless, inept, and corrupt administration currently inhabiting the White House that is complicit in the death of our servicemen and women in Afghanistan, please take your business elsewhere.” 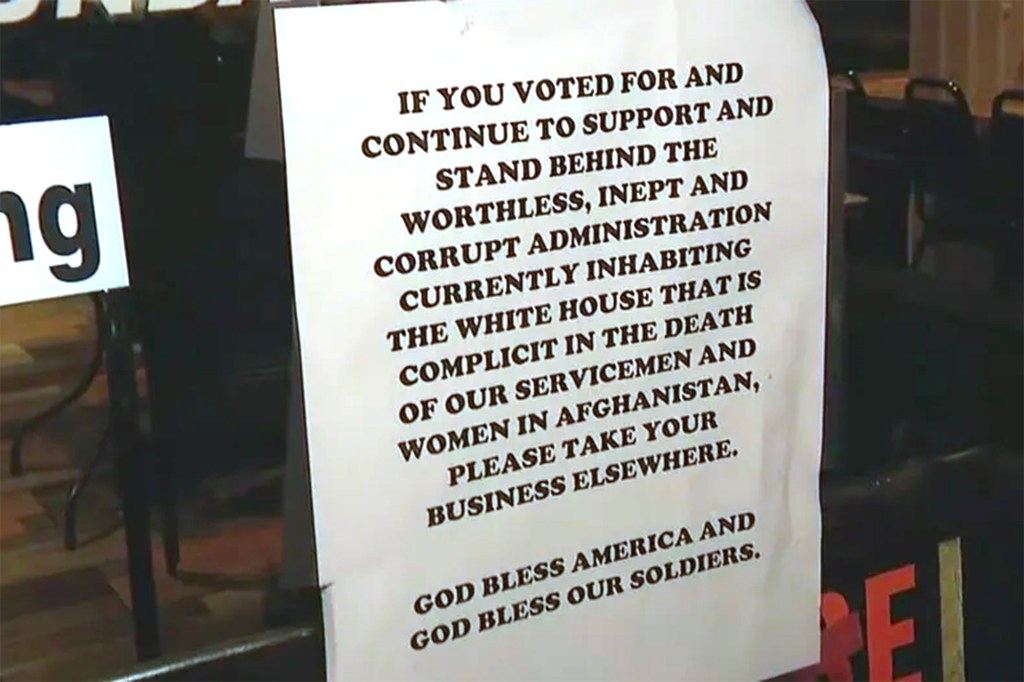 Talking to the press, Ugarte expressed the pain and emotions she felt hearing about the bombing. “It was the only thing I felt like I could do. I was just angry; I was just let down. I felt like one of those mothers or wives or sisters who were going to get that knock on the door.”

Admitting that her diner has the tastiest Cubans in town, Ugarte also said the move for the sign was due to the fact that many of her customers are military veterans. “They have coffee every morning.”

Still, the sign has caused some of her business to turn away. The owner said, “I’ve had people come to the door and look at it and turn around and walk away. And I’ve had people come into my kitchen while I’m cooking and say, ‘Hey, I like your sign.’”

But even with the loss of business, Ugarte is in high spirits, saying “If you really, really still stand behind what’s allowed this to happen in the way that it has happened — which was unnecessary — then I really, really don’t want to be associated with you in any way and I certainly don’t want your business.

This piece was written by Jeremy Porter on September 1, 2021. It originally appeared in DrewBerquist.com and is used by permission.

The opinions expressed by contributors and/or content partners are their own and do not necessarily reflect the views of Wayne Dupree. Contact us for guidelines on submitting your own commentary.

Attn: Wayne Dupree is a free speech champion who works tirelessly to bring you news that the mainstream media ignores. But he needs your support in order to keep delivering quality, independent journalism. You can make a huge impact in the war against fake news by pledging as little as $5 per month. Please click here Patreon.com/WDShow to help Wayne battle the fake news media.