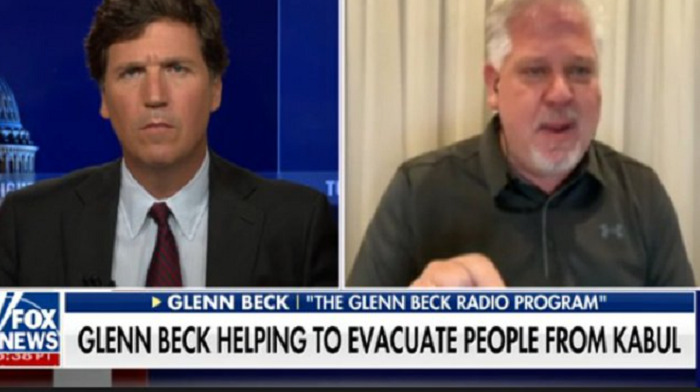 Conservative radio personality Glenn Beck made a startling claim that his organization is being “blocked” by the State Department in their efforts to rescue Christians from the Taliban in Afghanistan.

Beck, in an interview with Fox News anchor Tucker Carlson, said his group, the Nazarene Fund, has been actively working to evacuate Christians and other at-risk refugees from the chaos in Afghanistan.

Specifically, he relayed a story about the organization having 500 Afghan Christians inside the Kabul airport hours before yesterday’s suicide attacks, only for the State Department to order them back outside the gates.

Beck went on to suggest some of those killed in the terror bombing may have been in that group.

“We believe that our State Department is directly responsible for what we believe were some of these people,” said Beck. “I don’t know how many survived.”

.@glennbeck on @TuckerCarlson says the US State Department is blocking his organization’s help every step of the way, and is likely directly responsible for the death of a large group of Afghan Christians. https://t.co/RkIwc1N36x pic.twitter.com/dlRTEIG6X8

He added that he had seen photos of bodies strewn throughout the same location where some of the Afghan Christians had been sent back outside the gate.

Aside from his story, however, there is currently no concrete evidence that the State Department ordered them back outside the gates, or if they did, that it wasn’t due to them violating some sort of protocol at the time.

“We haven’t really been able to move anybody for about 12 hours,” Beck said. “Our mission is now changing greatly.”

He added, “I believe what our government is doing now is out and out evil.”

A State Department spokesperson told the Catholic News Agency that “the U.S. government is not organizing private charter evacuation flights, nor is it endorsing claims by third parties of providing airport access in Kabul.”

Afghan Christians “are not being allowed to board USG (U.S. government) flights in Kabul. I’m advising them to try to board @glennbeck‘s flights instead.”

RELATED: Psaki Responds To Calls For Biden’s Resignation: ‘Not A Day For Politics’

State Department Warned Congressional Offices Not To Interfere In Afghanistan

A report surfaced Thursday that the State Department had been sending out letters to congressional offices warning them not to interfere in operations in Afghanistan.

Staff was being warned not to direct people toward the Kabul airport in light of terror threats.

“All staff engaging in this type of uncoordinated messaging to people on the ground must cease due to the security situation,” a State Department message said according to Fox News.

This follows a warning from State Department today telling congressional offices not to direct people to Kabul airport. But it also seemed to warn against congressional intervention more broadly:

Whether such a warning was also issued to Beck’s group has not been determined.

Fox reports that “multiple congressional offices” were planning to ignore the State Department’s warning citing the current situation involving refugees and Christians in Afghanistan as “an all hands on deck moment.”

Beck, meanwhile, has said his group has raised nearly $30 million to get Christians out of Afghanistan and vowed to continue fighting to get them to a safe haven.

“We will not forget those left behind,” he wrote in an Instagram post Thursday. “Our mission there gets tougher and more dangerous.”