GOP Sen. Kennedy Rips ‘Defund The Police’ – Some People ‘Just Aren’t Fit To Be Part Of Our Society’ 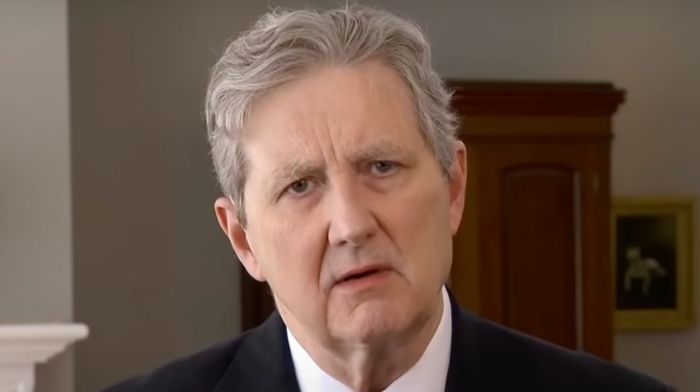 Sen. John Kennedy (R-LA) went on Fox News on Wednesday to blast Democrats for their efforts to “defund the police,” saying that law enforcement is crucial because some people “just aren’t fit to be part of our society.”

Kennedy then called on President Joe Biden to definitively slam the idea of defunding the police as crime spikes all over the country.

“[T]here are some people in this world that just aren’t fit to be part of our society,” Kennedy began. “They’re not sick. They’re not mixed up. They’re not confused. It’s not a question of whether their momma or daddy loved them enough. They’re just anti-social. In terms of public safety, they’re just bad.”

“And we — I thought as a society — had agreed that that’s why we need law enforcement is to get them off the streets and to protect the law-abiding citizens from them,” he added. “That was a universal truth. Apparently, no longer, not all, but many of my Democratic colleagues have done an about-face.”

Not stopping there, Kennedy proceeded to double down by defending American police officers.

“Now, the bad guys are the cops. I hear it every day,” he said. “The cops are guilty until proven innocent, and they’re all a bunch of racists — apparently even the African-American police officers. I just don’t get it. And President Biden, bless his heart, he can run around like a fox on fire and say, not me, I never said that, I’m not a part of it.”

Related: GOP Sen. Kennedy Claims Biden Has ‘Ph.D’ In Lying – ‘Not Telling The Truth’ On Defunding The Police

“They not only talked about defunding the police, they did it,” he continued. “And what was the result? It was very predictable.”

“Crime has gone through the roof, and it can be reversed, but if the president asked me my opinion – – he hasn’t — but if he did, I would say, Mr. President, you need to stand up in front of God and country and say, all this defund the police stuff has got to stop and tell your supporters, these Democratic mayors, to lift the police up,” he concluded. “Don’t put them down.”

Check out his full comments below.

Americans, Not Government, Are the Arbiters of Truth