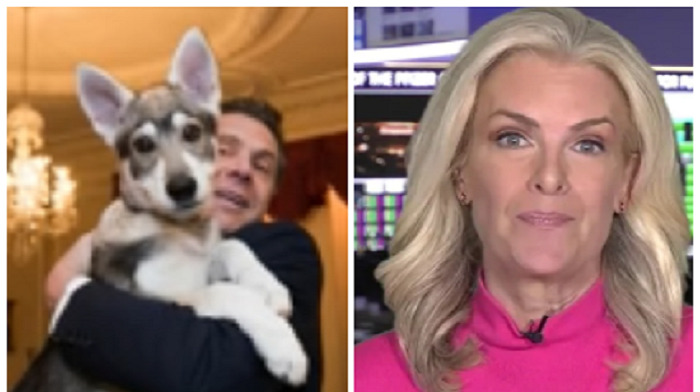 Fox News meteorologist and author Janice Dean tweeted that she would be willing to take Governor Cuomo’s dog, Captain, following reports that the shepherd/Siberian mix had been abandoned at the executive mansion.

The Times Union reported Monday that in the process of preparing to resign amidst multiple scandals including the alleged sexual harassment of numerous women, Andrew Cuomo had left the dog behind.

Cuomo “recently has asked staff members at the Executive Mansion if anyone would like to keep his dog, Captain, who has remained at the state-owned residence after the governor moved out last week,” the newspaper claimed.

“Omg,” Dean tweeted in disgust. “I will take this dog. What a terrible human he is.”

Omg. I will take this dog. What a terrible human he is. https://t.co/8nuNEh8gT0

RELATED: Chris Cuomo Says He Gave ‘Advice’ To His Brother, Urged Him To Resign

The Times Union maintains that Cuomo “recently asked mansion staff members if anyone would be interested in caring for the dog,” with one bringing Captain home but deciding he might be too much for them to care for.

A state police source, according to the paper, stated that “(Cuomo) tried giving the dog to the (a mansion employee).”

“Apparently (the employee) took the dog home and it didn’t work — the dog walks him, he don’t walk the dog,” the source said.

Spectrum News reporter Nick Reisman openly wondered why state police sources would be willing to leak a new scandal even on the day that Governor Cuomo is set to depart.

“The story isn’t the dog …” he tweeted, “it’s the State Police leaking embarrassing stuff about Cuomo on the way out.”

How much must they despise him to generate another headache for the soon-to-be ex-Governor of New York state?

The story isn’t the dog (although I get people are concerned), it’s the State Police leaking embarrassing stuff about Cuomo on the way out.

Rich Azzopardi, a top Cuomo aide who has vowed to go down with the sinking ship, vehemently denied the Times Union report.

Azzopardi claimed the arrangement with the mansion employee was only temporary as the Governor has a planned vacation following his resignation.

“Captain is part of the governor’s family and for your nameless ill-informed source to imply they’ve been trying to give him away is untrue,” he stomped.

Everything about that article is hilarious. He tried to give away the dog. Azzopardi practically crying in his denial. The ending where he claims climate change forces the dog to pee indoors. I can’t stop laughing.

Replying to Reisman, she wrote: “I would argue the story is about how the disgraced governor is not a nice human being.”

Dean later reiterated her offer to take Captain to a loving home.

“Please tell staff members I would be honored to take Captain and give him a loving home,” she tweeted to Casey Seiler, editor of the Times Union.

Please tell staff members I would be honored to take Captain and give him a loving home. https://t.co/HsdFbk4ZrY

Last May, pollster Jonathan Zogby jokingly published a poll about the popularity of New York’s First Dog. And Captain performed quite well.

“Captain has maintained a lower profile than his owner, but like his owner, is enjoying a surge in popularity,” Zogny wrote at the time.

“Dogs (unfortunately for Captain) don’t pick their owners,” he added.

Biden Says That History Will Judge Him As ‘Logical, Rational And Right’ On Afghanistan