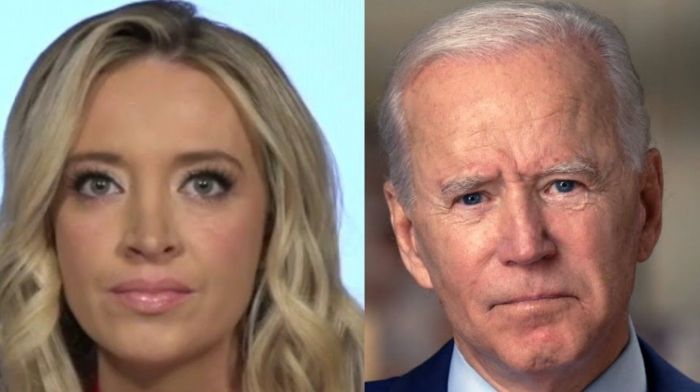 Former White House Press Secretary Kayleigh McEnany spoke out on Monday to slam President Joe Biden and his administration for the actions that they have taken since the Taliban rejected the U.S. troop withdrawal extension.

“I’ve got to hand it to the Pentagon press corps. The questions they’ve been asking are in-depth, they’re smart, tough, the type of things the American people want and deserve to know,” McEnany said. “But we’re not getting answers. The only thing we’ve learned out of this is that the Biden administration is really bad at numbers.”

Related: Kayleigh McEnany Says Murdered Chicago Cop ‘Did A Heck Of A Lot More’ For U.S. Than Cori Bush

“One of the most obvious questions is how many Americans are on the ground,” she said while appearing on Fox News.

“He didn’t take up the time to pick up the phone and call Secretary of State Antony Blinken and get that number for us when you are the one place we are getting information from today, when there are nearly 15,000 American hostages on the ground?” she asked.

“Jen Psaki promised us a daily White House press briefing,” McEnany said. “There isn’t one today. There wasn’t one Monday. When the going gets tough, the daily press briefing that she promised goes out the window.”

Biden was widely panned for an interview he gave to George Stephanopoulis a few days ago in which he knocked on wood and said “no one’s being killed right now.”

This piece was written by James Samson on August 24, 2021. It originally appeared in LifeZette and is used by permission.