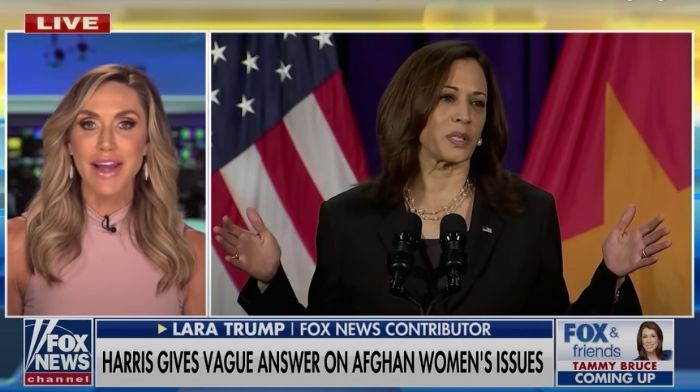 Mrs. Trump made her comments during an interview on Fox News.

“They are happy to be activists when it’s politically advantageous,” Donald Trump’s daughter-in-law said on Fox News. https://t.co/1SnxjWd9zg

Lara Trump: Harris And Obama Are ‘Happy To Be Activists When It’s Politically Advantageous’

Trump continued, “The woke Democrat women are among the most hypocritical individuals to walk the face of the Earth.”

Trump accused the two Democrats of only caring about the plight of women in Afghanistan when it is politically convenient.

Right now, Trump said “It’s silence from them and it is noted.”

Trump said that girls as young as nine years old are “subjected to marriage at that age and raped and tortured, killed in the streets if they don’t follow the rule of the Taliban.”

“They [Obama and Harris] are happy to be activists when it’s politically advantageous,” Trump said. “And the second they have nothing to gain, they don’t care,”

“These women in Afghanistan will never see another day like they did before the United States left,” Trump added. “Their lives will be different forever.”

This is not the first time she has criticized Harris in particular for being silent on this subject.

Last month, Trump said the way Harris has dealt with Afghanistan is similar to how her administration continues to botch the southern border crisis.

Mrs. Trump To VP: ‘We Will Not Forget About It’

“She wants nothing to do with this (Afghanistan) situation because she knows as we all do this is a stain on America, it will stay forever and I guess she’s just trying to run out the clock on this thing, and think we’ll all forget about it,” Trump said on Fox News on August 26.

“We will not forget about it, Kamala Harris,” she added. “We have seen what you have done in this situation and it’s absolutely nothing.”