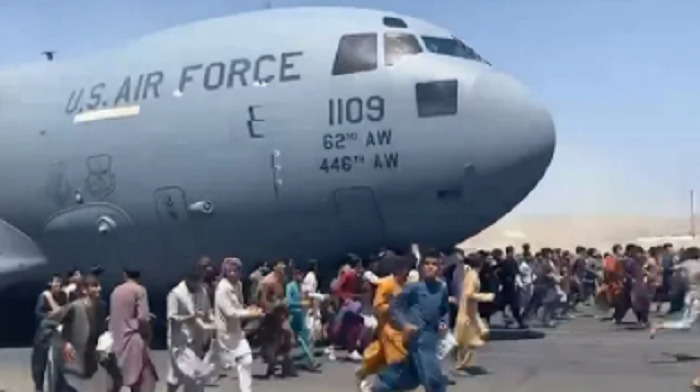 A leaked email from an official to a retired Marine attempting to charter private evacuation flights for Americans out of Afghanistan shows the Biden State Department refusing to grant approval to use military bases or land in the United States.

“The State Department explicitly stated that charter flights, even those containing American citizens, would not be allowed to land at Defense Department (DOD) airbases,” Fox reports.

The State Department said they would have “no objection” to the private evacuation flights looking for clearance to land in other countries even after acknowledging official authorization would likely be needed.

The email was sent to military lawyer and retired Marine, Eric Montalvo.

Evacuation Flights Out Of Afghanistan

According to the Daily Mail, top Biden administration officials claimed just a day after the email exchange that they were not, in fact, hindering any rescue efforts.

“The misimpression that is out there that we are preventing or even the idea that we could prevent a charter flight from taking off – that is simply untrue,” said State Department spokesman Ned Price. “We could not and we are not.”

The leaked email correspondence shows that the issue is not taking off, but rather landing.

Fox reports, “U.S. officials have pointed to possible security threats from landing charter planes at military bases, saying that they lack the resources on the ground to fully verify flight manifests.”

“No independent charters are allowed to land at [Al Udeid Air Base], the military airbase you mentioned in your communication with Samantha Power,” it reads.

“In fact, no charters are allowed to land at an [sic] DoD base and most if not all countries in the Middle Eastern region, with the exception of perhaps Saudi Arabia, will allow charters to land,” the official wrote.

“You need to find another destination country, and it can’t be the U.S. either.”

A Newsweek article titled ‘Taliban Holds Up Glenn Beck Group’s Planes’ addresses some of the recent challenges The Nazarene Fund faced evacuating people our govt left behind in Afghanistan. But let me break down what was actually going on with our State Department … pic.twitter.com/Xfg3qtgQYX

RELATED: California School Officials: There May ‘Easily’ Be Over A Thousand Left Behind In Afghanistan

Another private rescue group known as PlanB has made similar accusations against the State Department.

The organizer for that group, according to Fox News, has said “the State Department is the only thing preventing the flights he’s organizing from leaving Afghanistan.”

Another independent rescue operator, according to the outlet, has said the department is the only thing preventing them from saving American lives.

“Those are our people standing on the tarmac and all it takes is a f***ing phone call,” that person reportedly said.

“If one life is lost as a result of this, the blood is on the White House’s hands. The blood is on their hands,” they added. “It is not the Taliban that is holding this up – as much as it sickens me to say that – it is the United States government.”

Multiple sources have confirmed to me that the main obstacle to rescuing American citizens from Afghanistan is our own State Department.

Representative Markwayne Mullin (R-OK) accused the State Department of trying to sabotage a rescue effort and then falsely taking credit when the mission worked to save four Americans.

“When I (saw) the State Department come out and take credit for this, it is absolutely a lie,” he added.

Conservative radio personality Glenn Beck also made the claim nearly two weeks ago that his organization was being “blocked” by the State Department in their efforts to rescue Christians from the Taliban in Afghanistan.

A Tale Of Two Phone Calls: One Trump, One Biden