MAGA Rep. Boebert Calls For Biden And Harris Impeachment, Pelosi To Be Removed Over Afghanistan Withdrawal 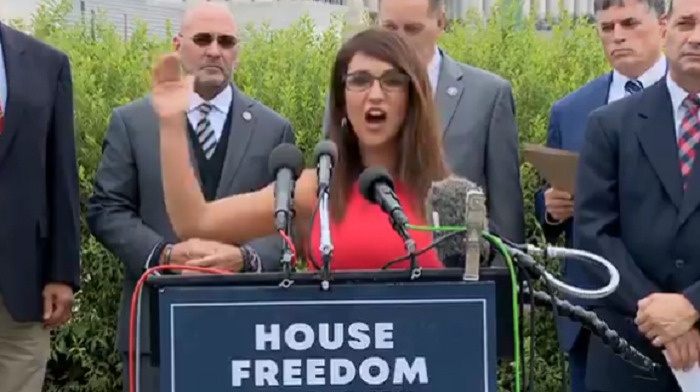 Pro-Trump Representative Lauren Boebert went scorched earth during a press conference, calling for the impeachment of President Biden and Vice President Kamala Harris over the chaotic withdrawal of troops from Afghanistan.

Boebert (R-CO), speaking on Tuesday with the House Freedom Caucus, called for the Commander-in-Chief’s impeachment.

But she also sought impeachment for Harris, who she believes has failed the American people by not invoking the 25th Amendment.

“The blame starts at the top with Biden and his hand-picked Vice President who bragged that she was right there making the same bad decisions,” declared Boebert.

“And if not for her own dereliction of duty, she should be impeached for not demanding we invoke the 25th amendment,” the fiery right-wing Republican added.

“It is time for action. Impeach Biden. Impeach Kamala Harris.”

Boebert Calls For Accountability Down The Line

In addition to calling for President Biden and Vice President Kamala Harris’ impeachment, Boebert went after a member of the Cabinet, Secretary of State Antony Blinken.

She also expressed hope that the House would vote to remove Speaker Nancy Pelosi.

“It is time for action … impeach Biden impeach Kamala Harris, and throw in the Secretary of State, if you could get him back from vacation, take a vote to vacate the chair to get Nancy Pelosi the heck out of here,” she railed.

The 25th Amendment to the Constitution allows the vice president and members of the cabinet to vote to remove a president who they deem unable to fulfill their duties.

If there are any Republicans who have any doubt, know that you will be facing your own primaries and no amount of money will be able to save you.

Nobody Has Been Fired Or Punished Over Afghanistan Withdrawal

Remarkably, nobody in the administration has paid the price over the botched Afghanistan withdrawal which culminated in a terrorist attack that claimed the lives of 13 U.S. service members and roughly 200 Afghans, and left Americans behind.

And why would they, with an agitated and defensive President Biden hardly able to contain his excitement in declaring the mission an “extraordinary success” in remarks Tuesday?

President Biden painting his abject historic disaster in Afghanistan as some kind of success for America is one of the most deluded & preposterous spectacles I’ve ever witnessed. Shameful and shameless. pic.twitter.com/mwTVb7Veva

The Washington Post earlier this week reported that some Democrats were privately expressing their concerns about the handling of the Afghanistan crisis and would like to see top Biden administration officials fired over the debacle.

“In private discussions, some House Democrats have raised the prospect of whether Secretary of State Antony Blinken and national security adviser Jake Sullivan — two of Biden’s most trusted aides — should lose their jobs,” the Post revealed.

That doesn’t appear to be happening any time soon.

Privately, ‘some House Democrats have raised the prospect of whether Secretary of State Antony Blinken and national security adviser Jake Sullivan…should lose their jobs,.’ From WP: https://t.co/zee6wIkbOG pic.twitter.com/IVcrqCeHvV

As for the 25th Amendment talk, Kathy McCollum, the grieving mother of United States Marine Rylee McCollum, who was killed in last week’s suicide bombing is likely to support the move.

Mother of U.S. Marine Rylee McCollum, who died in the Kabul bombing: “all you Democrats… who voted for [Biden], you just killed my son… never would have happened under Trump.” pic.twitter.com/74eZ24jwaE

“I never thought in a million years that (my son) would die for nothing. For nothing,” she anguished. “Because a feckless dementia-ridden piece of crap wanted a photo-op on Sept. 11, that’s what kills me.”

Report: Biden Pressured Afghan President To Create ‘Perception’ Taliban Wasn’t Winning ‘Whether It Is True Or Not’