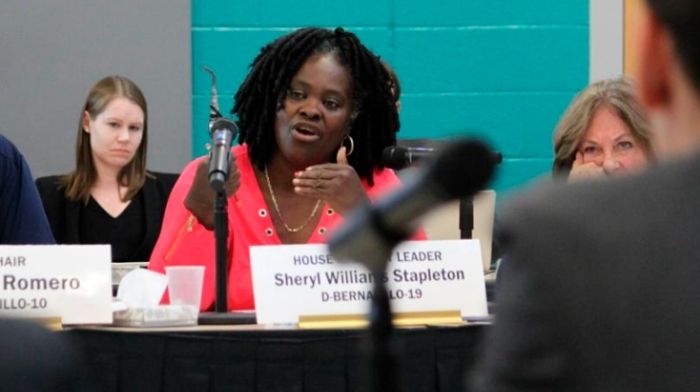 Democrat New Mexico House Majority Leader Sheryl Williams Stapleton stepped down from the highest ranking position in the statehouse on Friday. She’s being investigated for fraud, racketeering, and money laundering.

Stapleton, an employee of the Albuquerque school district, was placed on leave along with 11 others employees over the investigation.

The investigation came about after a mislabeled invoice pointed to a possibly improper relationship with a contractor who has received millions of dollars.

Further, authorities suspect she used her political position to steer funds to business entities she is tied to.

Nature Of The Allegations

The contractor in question is a company called Robotics Management Learning Systems LLC, which provides computer software for the district.

Questions began to arise when the school’s system showed only 691 “unique users” of the software, in a district that has almost 80,000 students.

As the criminal investigation into Rep. Sheryl Williams Stapleton continues, the African American Performing Arts Center at Expo New Mexico is rethinking its name dedication to the former representative.https://t.co/U3VlFcGWE8

The Albuquerque Journal reports that the investigation has so far revealed that more than $950,000 was funneled to two businesses and two non-profits which have ties to Stapleton.

More eyebrows were raised when it was discovered that instead of paying a licensing fee for use of the software for the entire school district, $40,000 payments for licensing fees were being paid for each individual school.

RELATED: Rudy Giuliani Denies He Committed Any Crime Amid Federal Probe – Says He’s ‘More Than Willing To Go To Jail’

So far no charges have been filed in the case.

A statement from New Mexico Governor Michelle Lujan Grisham (D) said she was, “deeply, deeply troubled by the reports this morning about a law enforcement investigation into Rep. Stapleton. Public confidence in government is seriously damaged by even the appearance of impropriety, or illegal activity, which is why public officials must always hold themselves to the highest possible standard of behavior.”

The Governor added, “New Mexicans expect and deserve elected officials who, regardless of party, will put the people before themselves. Anything less violates a sacred public trust and must be dealt with accordingly,”

Stapleton’s attorney Ahmad Assed stated, “We have to do our due diligence and our own investigation. Rep. Stapleton will have a comment when it is appropriate. That could be soon or later in the process.”

Sheryl Williams-Stapleton made news in 2011 when, during a dust up with a Republican lawmaker on the floor of the Capitol, accused them of “carrying the Mexican’s water on the fourth floor.” Williams was referring to then-Gov. Susanna Martinez, who is Mexican-American.

Sheryl Williams Stapleton:
In 2011, she referred to then-Gov. Susana Martinez, a Republican, as “the Mexican on the fourth floor.”
Lawmaker rose to power at Roundhouse https://t.co/xk4GHAMJhO #abq via @abqjournal