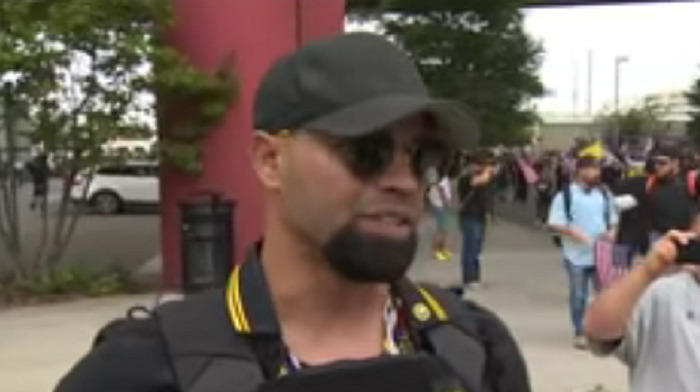 Proud Boys leader Henry Tarrio, who was previously fingered as a ‘prolific’ informant for law enforcement, was sentenced to nearly six months in jail after admitting he burned a Black Lives Matter (BLM) flag taken from a historic Black church and carried gun magazines into Washington, D.C.

The incident took place during a pro-Trump demonstration in Washington this past December.

Tarrio also pled guilty to attempting to possess a standard-capacity gun magazine, which is illegal in the Capital.

Both crimes are misdemeanors, punishable by up to six months in prison. Federal prosecutors had been seeking 90 days followed by probation.

Instead, Tarrio received a sentence of 155 days – beginning when he is ordered to surrender on September 6th.

A press release by the Department of Justice reads:

The Honorable Harold L. Cushenberry, Jr. sentenced Tarrio to 90 days of jail on the destruction of property charge and 150 days in jail on the ammunition offense; the judge suspended all but 155 days of that time on the condition that Tarrio successfully complete three years of probation.

Prosecutors argued that the Proud Boys leader’s actions in burning the banner “had profound emotional and psychological effect upon the church and its members.”

He has also been ordered to pay fines and restitution to the church.

NEW: The leader of the far-right Proud Boys was sentenced to more than 5 months in jail after admitting that he burned a Black Lives Matter banner taken from a historic Black church in Washington during a pro-Trump demonstration in December. https://t.co/UCEsAbHsWo

RELATED: GOP Reps. Demand Explanation For Why Capitol Protesters Are Being Jailed When BLM Protesters Were Not

Henry Tarrio, who is known to his friends as ‘Enrique,’ has been described by a former prosecutor as an informant for federal and local law enforcement.

Reuters reported in January, around the time of his arrest, that Tarrio had “repeatedly work(ed) undercover for investigators after he was arrested in 2012.”

He denied the allegation of being an informant, but Reuters notes that a 2014 court transcript betrays that denial.

The transcript indicates that a prosecutor, in arguing for a reduced sentence for Tarrio at the time, had provided information that “led to the prosecution of 13 people on federal charges in two separate cases, and had helped local authorities investigate a gambling ring.”

RELATED: DEA Agent Arrested For Bringing Gun, Badge To Capitol Protest, Claimed He Was There To Help FBI

Not Involved In Capitol Riot

The guilty plea and jail sentence for Proud Boys leader Henry Tarrio are unrelated to the group’s involvement in the Capitol riot on January 6th.

At least three dozen members or followers of the Proud Boys have been charged in that incident, according to NBC News.

Last month, an off-duty DEA agent was arrested after federal prosecutors accused him of brandishing his government-issued firearm during the Capitol protest on January 6.

Mark Ibrahim of California was on leave from agency on that day, per court filings, but was carrying DEA-issued firearm that day

Ibrahim is about to appear in court

In July, Representative Lauren Boebert (R-CO) and ten House Republicans sent a letter to Attorney General Merrick Garland demanding to know why protesters at the Capitol have been arrested and jailed while many BLM protesters were not.

The letter asked Garland to explain an “inconsistent application of the law with respect to rioters across the country.”

Indefinite detention is a tactic used to coerce confessions or entice a plea.

No American citizen should be held indefinitely without charges. All of us are protected by the 6th Amendment.

The Biden regime needs to explain their treatment of the Jan. 6 rioters, now.

A report by The Guardian in May indicated that dozens “of those defendants (Capitol protesters) remained in detention.”

By contrast, prosecutors signed off on at least a dozen “deferred resolution agreements in federal felony cases” from clashes in last year’s BLM protests.

In 2019, a member of the Revolutionary Communist Party had charges dropped after burning American flags outside the White House.