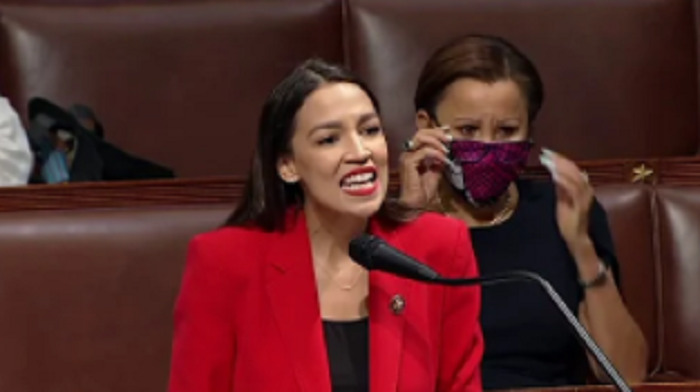 Representative Alexandria Ocasio-Cortez (AOC), a staunch advocate for the ‘defund the police’ movement, has spent thousands of dollars on private security in 2021.

According to the New York Post, Tullis is owned by Devin Tullis, a former Blackwater contractor “whose other clients include the royal families of both Saudi Arabia and the United Arab Emirates.”

“Out of one corner of her mouth she is attacking the police and out of the other she is hiring cops who have gone private to protect her,” Reinish said.

AOC spending thousands of dollars on private security is one thing. Spending it on a contractor associated with the Iraq War seems next-level for the ‘defund the police,’ ‘defund the military’ Squad member.

Blackwater Security was a private military company contracted by the United States government to provide security services in Iraq.

In 2007, employees with the security contractor shot at Iraqi civilians, killing 17 and injuring 20 in Nisour Square, Baghdad, while escorting a U.S. embassy convoy.

Four of them were tried and convicted in 2014 – one for murder, three for manslaughter – in 2014, but were pardoned by former President Donald Trump.

This is true.
Here is AOC’s FEC disclosures.

Alexandria Ocasio-Cortez (AOC) has explicitly and frequently argued in favor of the ‘defund the police’ movement.

“Defunding the police means defunding police,” she said. “It does not mean budget tricks or funny math.”

AOC was called out by the Washington Post in 2018 for posting about out-of-control Pentagon spending using slightly massaged numbers to create a false impression.

MOMENTS AGO: Press Sec. Kayleigh McEnany slams Rep. AOC discussing uptick in NYC violence: “You have Rep. Ocasio-Cortez saying this is just because people are trying to get food with their families.” pic.twitter.com/SREtVGwZtF

RELATED: ‘Defund The Police’ Democrats Spent Millions On Private Security For Themselves

AOC isn’t the only one to spend thousands on private security even as she tries to defund the police.

According to documents compiled in a ‘Statement of Disbursements in the House,’ Representative Cori Bush (D-MO) spent thousands on private security, including a company called RSAT Security Consulting, LLC.

According to the Daily Caller, RSAT Security has an Instagram page that features “photos of police officers, military members, and members of the Secret Service.”

NEW: Rep. Cori Bush Wants To ‘Defund The Police’ But Spent Taxpayer Money On Private Security For Herself

The Political Insider last week reported that Democratic mayors in about 20 cities have spent millions in tax dollars for their own private security even as they promoted ‘defund the police’ actions.

They want a world where private security is a luxury for themselves, but a well-funded police force for your protection is unattainable.