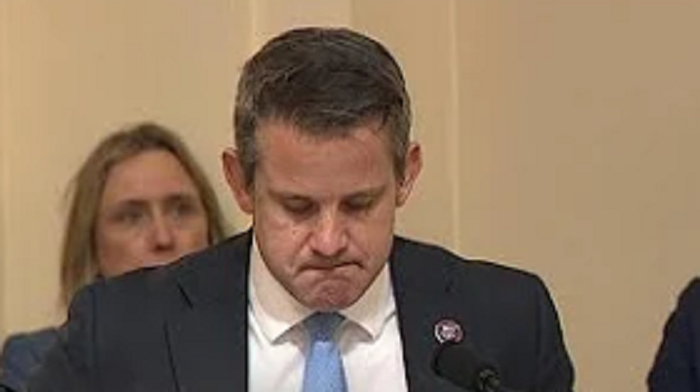 Politico is reporting that Democrats in Illinois are poised to introduce a new congressional map that could gut the district of anti-Trump Republican Adam Kinzinger, effectively ending his House career.

Democrats in the state have total control over redistricting, and the outlet reports they are alternately seeking to “gut” or “eliminate” Kinzinger’s district.

“Illinois lawmakers are on the verge of rolling out a new congressional map that will very likely gut Kinzinger’s exurban Chicago seat,” they write.

The move would leave the Republican Representative “with just a few bleak options for remaining in office next year.”

Politico notes that former President Donald Trump would love to be the one who takes him out, but it just might end up being the Democrats Kinzinger has been playing footsie with that actually make it happen.

Former President Donald Trump would love to take down Adam Kinzinger, one of his chief House GOP antagonists, in next year’s midterms. But Democrats might beat him to it. https://t.co/3FmUpBVl57

Adam Kinzinger’s District Could Be Eliminated

Politico reports that the Democrat redistricting effort would be hard for Adam Kinzinger (R-IL) to overcome.

It “could end the House career of one of the GOP’s most prominent Trump critics,” they suggest.

Rep. Mike Bost (R-IL) was asked if Kinzinger could win in a different seat, to which he replied, “It’d be hard.”

Kinzinger meanwhile is indicating he isn’t worried about the prospect of having his district and seat eliminated.

The report goes on to note that those close to the Republican congressman believe he may run for statewide office if his House seat is eliminated or “he could even mount a 2024 presidential bid.”

For his part, Kinzinger appears to be entertaining the idea.

“I certainly wouldn’t rule out Senate or governor and anything else,” he said. “Maybe, who knows?”

The irony is that the two Illinois Rs Dems are likeliest to axe are the ones they actually like the most: Reps. Adam Kinzinger (R) #IL16 & Rodney Davis (R) #IL13. https://t.co/B7sp0LHeRv

Kinzinger was one of two Republicans celebrated by House Speaker Nancy Pelosi and added to the select committee investigating the January 6 Capitol riot.

Democrats have long contended that the riot was an organized effort to overthrow the government at the direction of President Trump. Kinzinger willingly went along with the ruse.

His being duped by the Democrats led House Minority Leader Kevin McCarthy to refer to him as a ‘Pelosi Republican’ while considering punishment for his role on the select committee.

Kinzinger ended up making a spectacle of himself, weeping before the panel during their first hearing.

“Democracies are not defined by our bad days. We’re defined by how we come back from bad days.” https://t.co/Ivqza5UmhT pic.twitter.com/aqyBdqM8gk

Officials familiar with the FBI’s investigation into the Capitol riot have indicated there is little to no evidence that the event was a coordinated plot to overturn the election.

Kinzinger is throwing in with another Democrat witch hunt and the party still might go ahead and eliminate his House seat.

NBC Reporter On Afghan Crisis: ‘History Will Judge This Moment As A Very Dark Period’ For America