Report: Judge Bans Mom From Seeing Son Until She Gets COVID Vaccine 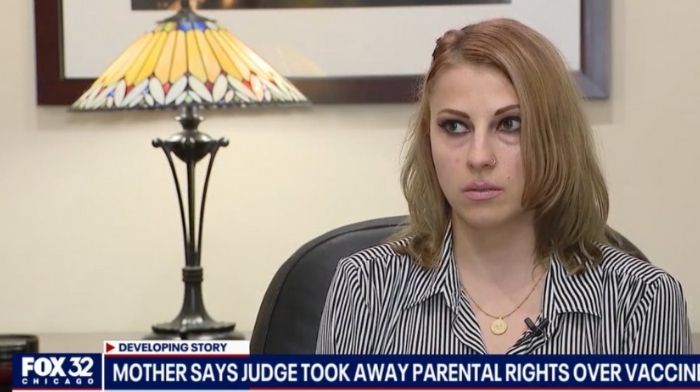 What was supposed to be a simple hearing on child support turned out to be way more than a Chicago area woman expected. When divorced mom Rebecca Firlit joined the virtual court hearing with her ex-husband and a judge, the judge asked whether or not she had received the COVID vaccine.

Firlit has not been vaccinated, and as a result, Judge James Shapiro revoked her visitation rights with her son, according to the Chicago Sun-Times.

Firlit’s reasoning is that she’s had “adverse reactions to vaccines in the past.” On the advice of her doctor she has not received the vaccine. She added that, “It poses a risk.”

The Sun-Times says that it may be the first ruling of its kind.

Thankfully, Shapiro seems to have had a change of heart, and reversed his own decision.

Shapiro has since rescinded the condition that she be vaccinated in order to visit her son.

RELATED: Report: American University Students In Afghanistan ‘Terrified’ After Having A List Of Their Names Given To Taliban

The issue of the hearing was child support and other expenses. Firlit said she asked the judge what her vaccination status had to do with the topic of the hearing.

Cook County Judge James Shapiro then reportedly replied, “I am the judge, and I make the decisions for your case.”

Her attorney Annette Fernholz calls it a case of “overreach,” adding that, “The father did not even bring this issue before the court. So it’s the judge on his own and making this decision that you can’t see your child until you’re vaccinated.”

What the hell is happening in this country???

“Judge James Shapiro removed Rebecca Firlit’s visitation rights with her 11-year-old son after learning that she had not yet received the vaccine.”https://t.co/ZwNgJIzkoM

Judge Shapiro may have overstepped his bounds, but he is not the only judge in the nation who is taking into consideration the vaccination status of defendants who come before them.

In Ohio, two judges have ordered defendants to receive vaccines as part of their probation. Two judges in Georgia have even reduced some sentences if defendants agree to get vaccinated.

In Louisiana, a judge in East Baton Rouge Parish has given defendants the option of getting vaccinated in lieu of completing community service hours.

MOM CLAIMS JUDGE TOOK AWAY PARENTAL RIGHTS OVER VACCINATION STATUS: In what all parties agree is a very unusual and perhaps unprecedented step, a judge in Chicago has stripped a mother of custody because she refuses to get a vaccination shot.

Update In The Case

For this case, currently there is a positive result. Rebecca Firlit’s attorney, Annette Fernholz said on Monday that the judge had reversed his order.

Monday morning, Firlit and Fernholz had filed a petition for an appeal of the ruling.

Then Fernholz said she received word from Judge Shapiro that stated he was “vacating portions of the previous order.” According to the Sun-Times, Shapiro did not give a reason for the reversal.

Firlit said, “I’m extremely happy, I’m going to see my son right now.” However this case is not over yet. Jeffrey Leving, attorney for Firlit’s ex-husband Matthew Duiven called the judge’s reversal, “unfortunate.” He also said, “I am working on an emergency motion right now to fight it.”

Firlit says she know a fight is coming. “I know that they are going to say that I’m an endangerment to my son. This isn’t over for me.”

The Cook County judge who barred a divorced Pilsen mother from seeing her 11-year-old son earlier this month because she’s not vaccinated against COVID-19 revoked that order Monday morning. https://t.co/PjnWCoXIV4