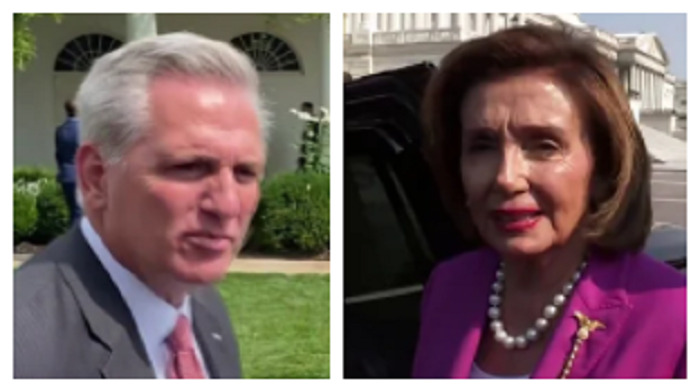 Several House Republicans refused to abide by a reinstated mask mandate in the House chamber Wednesday – which prompted Speaker Nancy Pelosi to call GOP Minority Leader Kevin McCarthy a “moron” for complaining it has nothing to do with science.

The heated exchanges stem from the new mask requirement which was reinstituted this week.

Half a dozen GOP members refused to wear masks after Capitol physician Brian Monahan said that people are required to wear them again inside the chamber in an alert sent out Tuesday.

Each of them risks having to pay hefty fines as punishment for not wearing a mask.

Boebert reportedly threw a mask back at a floor staffer when she was offered one, while Roy forced a vote to adjourn in protest of the mask mandate saying, “This institution is a sham!”

A witness told me they saw GOP Rep. Lauren Boebert throw a mask back at a floor staffer when she was offered one while trying to walk onto the floor maskless. Members can now be fined in the House when maskless

RELATED: Biden Will Make Vaccines Mandatory For Federal Employees, Says Unvaccinated Americans ‘Not Nearly As Smart As I Thought You Were’

Mask Mandate Not About Science

House Minority Leader Kevin McCarthy blasted Pelosi for reinstituting the mask mandate, indicating that forcing members who are predominantly fully vaccinated to wear masks is not ‘following the science.’

McCarthy said the requirement “is not a decision based on science, but a decision conjured up by liberal government officials who want to continue to live in a perpetual pandemic state.”

The California lawmaker has revealed in the past that he has been vaccinated and has already contracted the virus.

“He’s such a moron,” she told reporters when asked to comment.

RELATED: NYC Mayor Bill de Blasio On Vaccines: ‘The Voluntary Phase Is Over’

Does anyone remember the whole ’15 days to stop the spread’ mantra we were inundated with … in March of 2020 … 16 months ago?

As for being a moron, recall if you will that we all witnessed Pelosi going maskless at a hair salon last August while small businesses in San Francisco were struggling to stay afloat due to pandemic lockdowns.

And remember when Pelosi paid a visit to Chinatown last year, telling people they need not be afraid to go out in public even as the pandemic was setting in?

The animosity between Democrats and Republicans comes as the CDC is recommending even fully vaccinated Americans wear masks again and the White House and their allies are trying to implement vaccine mandates.

The Centers for Disease Control and Prevention (CDC) announced earlier this week that fully vaccinated Americans should wear masks indoors under certain circumstances and suggested all school children “regardless of vaccination status” continue wearing them indoors.

There has been little to no scientific evidence that schools have served as superspreaders for the pandemic.

In a new statement, Biden says, “Masking students is inconvenient, I know, but will allow them to learn and be with their classmates with the best available protection.”

President Biden, meanwhile, is set to announce mandatory vaccines for federal employees, taking a shot at the intelligence of any Americans who have chosen not to get the COVID shots.

“That’s under consideration right now,” he said of the vaccine mandates, “but if you’re not vaccinated you’re not nearly as smart as I thought you were.”

“If you’re not vaccinated you’re not nearly as smart as I thought you were” https://t.co/0ePLjMnt98 pic.twitter.com/IfsCSINhyg

“We’ve got to shake people at this point and say, come on now. We tried voluntary,” he said.

“The voluntary phase is over.”

“We won’t go back. We won’t mask our children,” he declared. “Joe Biden and his Administration learned nothing from the last year.”

Trump asked, “Why do Democrats distrust the science?”

“Don’t let this happen to our children or our Country,” he pleaded.