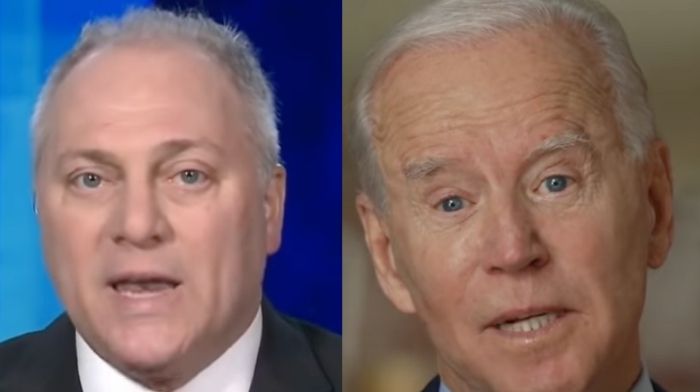 House Minority Whip Rep. Steve Scalise (R-LA) went on Fox News on Wednesday morning to call out Joe Biden for focusing on the passage of $3.5 trillion spending bill while Americans are “stranded” in Afghanistan.

Scalise said that Biden should be focusing all of his energy on getting Americans out of Afghanistan, rather than on praising House Democrats and “wasting time” on the bill.

“I think what was the most disgraceful thing about this week, in addition to the President of the United States cowering to a terrorist organization, the Taliban, going off of their timeline instead of saying we are getting every single American out, there are thousands of Americans that President Biden stranded behind enemy lines, and instead of spending every minute working to get them out, he put a shot clock on them saying there is only seven days left to get all Americans out,” Scalise said.

“He was wasting precious time this week burning the phones up, pressuring Democrats to vote for a $5 trillion spending bill and tax bill. That’s what he was wasting time on,” he added.

“Every minute of his day should be getting all Americans out because we are going to look back after the timeline that shouldn’t be in place has passed and we know that there are Americans still behind enemy lines, and he wasted time just trying to pressure to get a tax and spend bill passed through Congress this week instead of trying to get every American out, which is his main responsibility,” Scalise concluded. “That’s the oath he took up.”

This came one day after Scalise gave an impassioned speech on the House floor in which he slammed Democrats for “ramming through” a massive $3.5 trillion budget framework as the chaos continues in Afghanistan.

“President Biden should be the President of the United States, not bowing to terrorists,” Scalise said, according to Fox News. “Not bowing to anybody except committing that he’ll get all Americans out instead of living by some artificial deadline.”

“But if he fails to do it, people will look back and say, ‘What was he doing instead? What were the President of the United States’ priorities?’” Scalise continued. “He was pressuring members of Congress to vote for this garbage. Trillions of dollars in debt and spending rather than focus on getting Americans out of harm’s way that he left behind. It’s a national and international disgrace.”

Newt Gingrich Wastes No Time Revealing The Ugly, Raw Truth of What Biden Has Done…