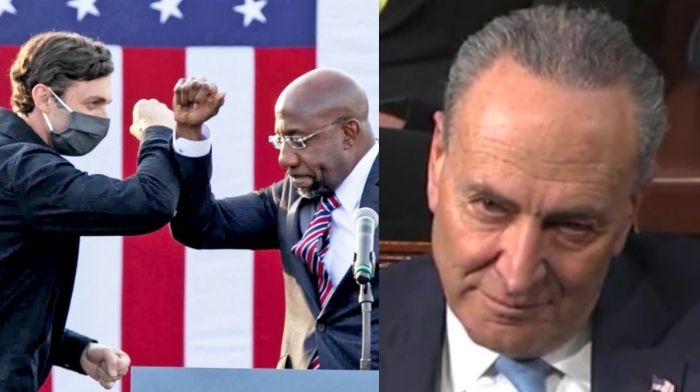 “It feels like a brand new day. For the first time in six years, Democrats will operate a majority in the United States Senate — and that will be very good for the American people,” Schumer said.

“America is experiencing one of the greatest crises we have ever faced, and the Senate Democratic Majority is committed to delivering the bold change and help Americans need and demand. Senate Democrats know America is hurting — help is on the way,” he added.

Schumer went on to thank the people from Georgia and all over the country who “volunteered their time, donated what they could, and worked so hard to elect new leadership in Washington.”

Not stopping there, Schumer also heaped praise on Georgia Democrats Raphael Warnock and Jon Ossoff, who he referred to as “senators-elect.” He claimed that they ran “first-rate campaigns and will be outstanding Senators for Georgia.”

“Yesterday, Georgia just elected its first African-American Senator in its history. I am so proud of both their campaigns and excited to welcome them to the Senate,” Schumer continued.

“As Majority Leader, President-elect Biden and Vice President-elect Harris will have a partner who is ready, willing and able to help achieve a forward-looking agenda and deliver help and bold change to the American people,” Schumer said.

He then claimed that help was “stalled or diluted” by Republican leadership in the Senate.

“That will change with a Democratic Senate, Democratic House, and Democratic President,” Schumer concluded, promising to “work every day to reward the faith that the American people have placed in us.”

While Warnock has been declared the winner against GOP incumbent Sen. Kelly Loeffler (R-GA) for one of the Senate seats, the race between Ossoff and GOP Sen. David Perdue (R-GA) has yet to be called.

“As we’ve said repeatedly over the last several weeks and as recently as this evening, this is an exceptionally close election that will require time and transparency to be certain the results are fair and accurate and the voices of Georgians are heard,” Perdue’s campaign said in a statement this morning.

“We will mobilize every available resource and exhaust every legal recourse to ensure all legally cast ballots are properly counted,” his campaign continued. “We believe in the end, Senator Perdue will be victorious.”

This piece was written by James Samson on January 6, 2021. It originally appeared in LifeZette and is used by permission.

Read more at LifeZette:
Joy Behar Comes Unglued As She Calls For Trump To Be Impeached For ‘Treason’
Meghan McCain Takes A Stand For Trump Voters As She Returns To ‘The View’
CNN Host Jake Tapper Claims Republicans Are Attempting ‘Bloodless Coup’ By Objecting To Biden Win