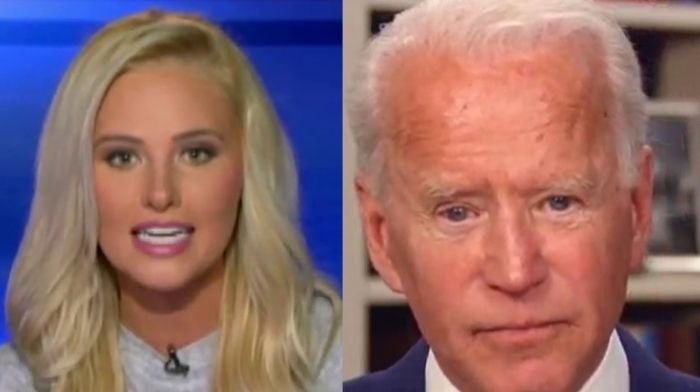 The conservative television personality Tomi Lahren spoke out this week to blast President Joe Biden for his handling of the crisis in Afghanistan.

“In case you were wondering, the situation in Afghanistan has not gotten any better and has only gotten worse,” she said while appearing on Fox News.

“The Taliban has overrun the country, the former Afghan leadership high-tailed it out of there, residents are desperately trying to flee and about 10,000 Americans are still stranded in that godforsaken desert,” Lahren added.

Lahren went on to say that instead of dealing with the escalating crisis in Afghanistan, Biden instead decided to focus on “masking your children.”

“He walked off without taking a single question – a single freakin’ question – from the media and without addressing Afghanistan at all, whatsoever,” she said earlier this week.

Not stopping there, Lahren proceeded to say that Biden is clearly “puppeteered and controlled” by the left, which has led to America’s enemies from around the world laughing at us. She then compared Biden to his predecessor, former President Donald Trump.

“If President Trump was at the helm I can guarantee you the messaging out of the Trump White House would be a death warning to every single member of the Taliban should a single American be killed or harmed trying to evacuate,” she said.

“Everything about this administration is an utter disgrace and voters, I hope you are taking notes,” Lahren concluded.

This comes after Trump himself also lashed out at Biden for dropping the ball in Afghanistan and endangering American lives.

“Biden surrendered Afghanistan to terrorists and left thousands of Americans for dead by pulling out the Military before our citizens,” Trump said in a statement. “Now we are learning that out of the 26,000 people who have been evacuated, only 4,000 are Americans.”

“You can be sure the Taliban, who are now in complete control, didn’t allow the best and the brightest to board these evacuation flights,” he added.

“Instead, we can only imagine how many thousands of terrorists have been airlifted out of Afghanistan and into neighborhoods around the world,” he concluded. “What a terrible failure. NO VETTING. How many terrorists will Joe Biden bring to America? We don’t know.”

“Biden surrendered Afghanistan to terrorists and left thousands of Americans for dead by pulling out the Military before our citizens. Now we are learning that out of the 26,000 people who have been evacuated, only 4,000 are Americans… pic.twitter.com/jaEYNViukb

It’s Dawning on the Democrats: Biden-Harris Will Drag Them Down