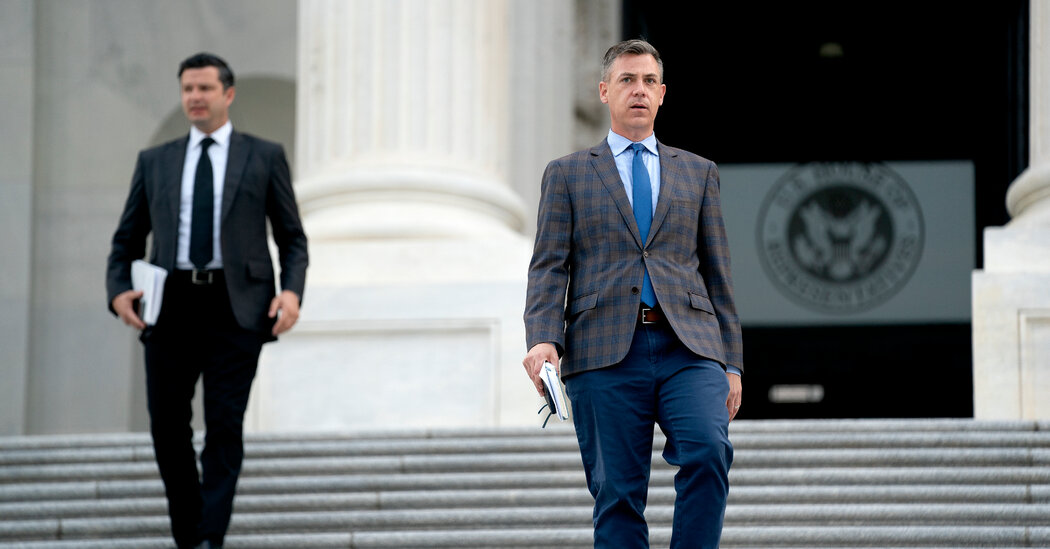 
Representative Kevin McCarthy of California, the minority leader, has chosen a pair of former President Donald J. Trump’s staunchest and most combative allies to be among his five picks to sit on the special House committee investigating the Jan. 6 attack on the Capitol, signaling a partisan battle to come over the inquiry.

Mr. McCarthy and Republicans had opposed the creation of the committee, which is to scrutinize the mob violence that delayed Congress’s formal adoption of President Biden’s victory. The 13-member select committee, created on a party-line vote of the House, will have seven Democrats and six Republican members, after Speaker Nancy Pelosi appointed Representative Liz Cheney, Republican of Wyoming and a harsh critic of Mr. Trump’s actions on Jan. 6, among her eight members.

The committee, which is chaired by Representative Bennie G. Thompson, Democrat of Mississippi, is scheduled to have its first meeting July 27 to hear from members of the Capitol and District of Columbia police forces who fought off the mob.

Ms. Pelosi still must agree to the five Republicans Mr. McCarthy has selected. If he gets his way, they will be:

Mr. Banks, the chairman of the conservative Republican Study Committee, will be the ranking member of the panel. He recently led several House Republicans on a trip to join Mr. Trump at an event at the southwestern border.

He voted against certifying electoral votes for Mr. Biden on Jan. 6 and against creating an independent, bipartisan commission to investigate the attack.

In a statement on Tuesday, he said Ms. Pelosi had created the panel “solely to malign conservatives and to justify the left’s authoritarian agenda.”

“I will not allow this committee to be turned into a forum for condemning millions of Americans because of their political beliefs,” he added.

A founding member of the hard-right House Freedom Caucus, Mr. Jordan is a pugnacious ally of Mr. Trump who led the effort to discredit the Russia investigation by Robert S. Mueller III and who was one of the former president’s most strident defenders during his first impeachment. Just before leaving office, Mr. Trump awarded him the Presidential Medal of Freedom.

Mr. Jordan also voted against certifying electoral votes for Mr. Biden on Jan. 6 and against creating an independent, bipartisan commission to investigate the attack.

On Tuesday, he branded the select committee “impeachment Round Three,” telling Newsmax, “This is to go after President Trump.”

Mr. Davis is the top Republican on the House Administration Committee, where he has studied Capitol security failures, and is known as a pragmatist.

He did not join his party’s effort to invalidate electoral votes for Mr. Biden on Jan. 6, and he was one of only 35 Republicans who voted to create an independent, bipartisan commission to investigate the attack.

He told the Herald & Review in January that the attack on the Capitol was the “second most terrifying moment” he had experienced as a member of Congress after a shooting that took place on a baseball field in 2017.

“It’s tragic we’ve gotten to this point in the country that people feel they can commit acts of violence because they’re inspired by politics,” he said.

Mr. Armstrong is a former criminal defense lawyer who earned praise from Mr. Trump for his defense during the former president’s first impeachment trial.

He did not object to electoral votes for Mr. Biden on Jan. 6, but he voted against the creation of an independent, bipartisan inquiry on the riot.

Mr. Armstrong, who was in the House balcony during the attack, has condemned conspiracy theories about the riot, and praised Capitol Police for their response.

A former sheriff, Mr. Nehls was among the lawmakers who assisted Capitol Police in barricading the door to the House floor during the Jan. 6 attack. Hours later, he joined most Republicans in voting against counting electoral votes for Mr. Biden. He also opposed forming an independent, bipartisan commission to investigate.

Why the EU’s Carbon Border Tax will Fail to Stop Carbon Leakage – Watts Up With That?

Why the EU’s Carbon Border Tax will Fail to Stop Carbon Leakage – Watts Up With That?